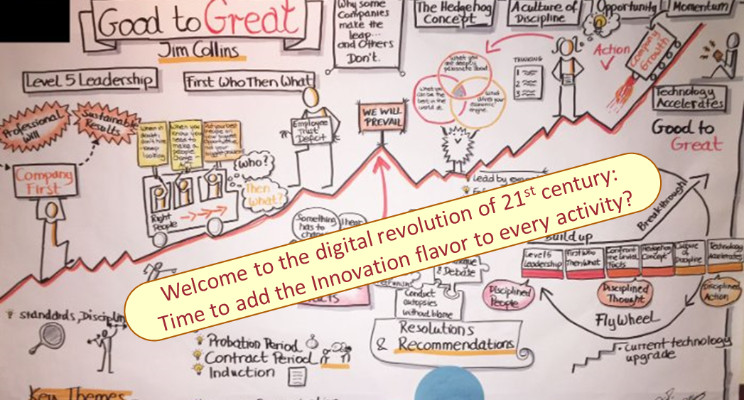 Is it time to add Innovation to Jim Collins published research from last century data.

In 2001 Jim Collins brought out a best seller – Good to Great – which became executive favorite for a long time. Collins research brought out that discipline in three areas: people, thought, and action, were likely the most significant factors in determining a company’s ability to achieve greatness.

I too followed it, preached it, and benefited from it for many years during my early leadership days in corporate world.

However, as the 21st century unfolded with rapid innovation, convergence of so many technologies, millennial’s, and social media; and my responsibility grew to lead R&D, I wondered – “What else needs to be added to Collin’s wisdom” in today’s context. Companies that beat all market financial averages and predictions today didn’t exist in 20th century and have gone beyond the findings of Jim Collins. Many of them can be perceived to have gone from “Inception to Great”.

Collins identified and evaluated the factors that enabled few companies to make the transition from merely good to truly great, defined in terms of growth relative to market average, in multiples over a sustained period of time. One overarching theme that links together virtually all of Collins’ arguments is the need to define a narrowly focused objective and field of competency and then focus all of the company’s resources toward that area of strength. Repeatedly, Collins warns that straying too far from a company’s established strengths is inimical to the attainment of greatness.

Question I have is, how do you reconcile this with breakthrough innovation? Perhaps that is what differentiates the Good to Great transition in 21st century as compared to the 20th century companies. Let’s examine each of the Collin’s findings as summarized in Wiki-summaries, with an innovation lens.

Level 5 leaders displayed an unusual mix of intense determination and profound humility. These leaders often have a long-term personal sense of investment in the company and its success, often cultivated through a career-spanning climb up the company’s ranks. The personal ego and individual financial gain are not as important as the long-term benefit of the team and the company.

This aspect is true in 21st century as well. A leader with profound humility can accept open innovation as a growth tool.

First Who Then What

Collins advances the concept that the process of securing high-quality, high-talent individuals with Level 5 leadership abilities must be undertaken before an overarching strategy can be developed. With the right people in the right positions, Collins contends that many of the management problems that plague companies and sap valuable resources will automatically dissipate. As such, he argues, firms seeking to make the Good to Great transition may find it worthwhile to expend extra energy and time on personnel searches and decision-making.

However, in today’s’ context, the search needs to include a level 5 leader with an innovative mindset. If innovation and an open progressive mind is not a search parameter, company could get into the situation like 3M.  Revered for decades as one of the world’s most innovative companies, 3M lost its innovative mojo when it began using Six Sigma to try to improve its operational efficiency under the leadership of James McNerney (a Jack Welch protege) as CEO in 2000. He introduced the Six Sigma discipline as soon as he took the helm of the firm, streamlining work processes, eliminating 10% of the workforce, and earning praise (initially) from Wall Street, as operating margins grew from 17% in 2001 to 23% by 2005.

But when McNerney tried to apply the Six Sigma discipline to 3M’s research and development processes it led to a dramatic fall-off in the number of innovative products developed by them during those years. And 3M had been famous for its innovations, in a wide variety of areas, from Scotch tape to Post-it Notes. I know that 3M is not a “Good to Great” pick, the point is Innovation mindset ought to be an important criterion for leadership search.

Another key element of transition from Good to Great is the willingness to identify and assess defining facts in the company and in the larger business environment. Consumer preferences are constantly changing, and the inability to keep pace with these changes often results in company failure. The Kroger and A&P example is a good one. Collins outlines a four-step process to promote awareness of emerging trends and potential problems: 1) Lead with questions, not answers; 2) Engage in dialogue and debate, not coercion; 3) Conduct autopsies without blame; and 4) Build red flag mechanisms that turn information into information that cannot be ignored.

Now almost 20 years later, a new brutal fact is the millennial consumer, social media, and ever-increasing rate of change making it harder to predict with enough time to adapt. Most questions and assumptions are about half good or less. Autopsies don’t help much because the context is completely new. I would submit point # 5) You either choose to be in a driver’s seat for change (i.e. innovate), or plan for multiple scenarios with agility to maneuver and outperform the pioneers as the future unfolds.

Collins asserts, the way to make the transformation from Good to Great is often not doing many things well, but instead, doing one thing better than anyone else in the world. It may take time to identify the single function that will be a particular firm’s “hedgehog concept,” but those who do successfully identify it are often rewarded with singular success. In order to help expedite this process, Collins suggests using the following three criteria: 1) Determine what you can be best in the world at and what you cannot be best in the world at; 2) Determine what drives your economic engine; and 3) Determine what you are deeply passionate about.

The three criteria are true in 21st century as well, just that innovation is likely to be an important part of the economic engine, unless you choose to define innovation as a separate engine.

A Culture of Discipline

Another defining characteristic of the companies that Collins defined as great in his study was an overarching organizational culture of discipline. He is quick to point out that a culture of discipline is not to be confused with a strict authoritarian environment; instead, Collins is referring to an organization in which each manager and staff member is driven by an unrelenting inner sense of determination. In this type of organization, each individual function as an entrepreneur, with a deeply rooted personal investment in both their own work and the company’s success. In addition, the author asserts, it is important that within this overarching culture of discipline, every team member is afforded the degree of personal empowerment and latitude that is necessary to ensure that they will be able to go to unheard-of extremes to bring the firm’s envisioned objectives into existence.

This aspect is true in 21st century as well. Entrepreneurial mindset and empowerment are a basis to encourage widespread innovation.

In 20th century businesses had come to depend upon technology to increase efficiency, reduce overhead, and maximize competitive advantage. However, Collins cautions that technology should not be regarded as a potential panacea for all that ails a company. Collins contends that the good-to-great companies approach the prospect of new and emerging technologies with the same prudence and careful deliberation that characterizes all of their other business decisions. Further, these companies tend to apply technology in a manner that is reflective of their “hedgehog concepts” — typically by selecting and focusing solely upon the development of a few technologies that are fundamentally compatible with their established strengths and objectives. Collins characterizes the ideal approach to technology with the following cycle:

Like discussed before the brutal reality of rate of change today, leaves no time to Pause, further demanding an overlap of “Think next” while “Running”. Millennial’s do not believe in crawl. So, the cycle boils down to

Very soon we will be in single mode “Keep Running and Thinking” that will define the great companies. Strategic innovation as an initiative with dedicated investment for development and marketing is a must. These need to happen in parallel, and ROI from “Run” and “Think Next” is not to be mixed.

The Flywheel and Doom Loop

Business decisions tend to accumulate incrementally in either an advantageous or a disadvantageous manner. Despite the popular misconception that business success or failure often occurs suddenly, Collins asserts that it more typically occurs over the course of years, and that both only transpire after sufficient positive or negative momentum has been accrued.

If we agree that we must add Innovation as an important element for Good to Great transformation in 21st century, and the flywheel concept is still valid, we will have to accept that innovation cannot be a privilege of the few or on certain occasions. It ought to become a mindset or culture i.e., across the organization and all the time. It ought to find a place in processes, products, services, business model, all the way from mundane things such as office arrangement to disruptive actions such as uberize or amazonian your business.

Beware, today, whatever happens, the social media seems to feed energy of its own, kind of like a feedback loop causing the wheel to speed up or slow down rather quickly. So consistent and sustained innovation, with continuous revisions to the road-map with an eye on the global trends is important. If you can use social media to build the fly wheel momentum, please do so; or at least ensure that it does not work against you.

Considering that my proposition is about innovation as a mindset, it goes beyond just the leadership, but it ought to flow down from the leadership. From that perspective I caution myself from identifying Innovation as an additional chapter to the book, but rather, embed it into every chapter of the book, and the associated thought process.

Just like Jim Collins researched companies and picked up candidate for Good to Great based on stock process, Doblin looked at impact of innovation on company performance post-recession. They describe ten distinct ways that a company can innovate.

They platted performance relative to benchmark with research of more than 2000 innovation projects. It clearly showed the impact of companies trying more than one type of innovation. While most companies innovate by improving the performance of their product, those companies which tried to add value by innovating in several ways were consistently more successful, with their innovations more likely to make a return on investment.

What do you think?